What is a Beefeater?

I know, I know it..... We have not been writing for a long time. Summer has been very busy for us but now we are coming back with new stories and posts for you.

Today we are telling you the story of Beefeaters:

A beefeater is a member of the Yeoman Warders, a ceremonial guard which oversees the Tower of London in England. Technically, the polite term is “Yeoman Warder,” although most people know the members of the iconic guard by their nickname. In the early days, Yeomen Warders were paid not in money but food, especially beef, which was a luxury – hence the nickname of Beefeater. The traditional scarlet-and-gold uniform, with tights and ruff, is worn only on ceremonial occasions. It’s very heavy, and, in 1858, we were given permission for our blue ‘undress’ uniform by Queen Victoria. 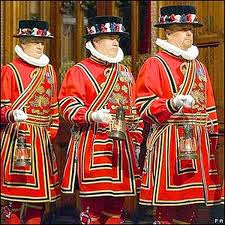 The Beefeaters, as they are nicknamed, have long been symbols of London and Britain.
In order to serve as a Yeoman Warder, an applicant must have 22 years of service in the British armed forces, along with awards for distinction and good conduct. Positions among this historic body are very coveted, and competition for open positions can be fierce.

The beefeaters were founded in 1485 under the reign of Henry VII. They are charged with the duty of guarding prisoners in the Tower of London, along with supervising the safety of the Crown Jewels. The modern Yeoman Warders also offer information and tours to visitors, and they care for the ravens which are housed at the Tower of London. Tourists readily identify the beefeaters by their distinctive uniforms, which are modeled on those used by the Yeoman Warders in the Tudor era.
Nowadays, you can have a tour at the Tower of London guided by one of these Beefeaters, who apart from telling you the histoy of the Tower, they will amuse you with exciting stories. It is worth!!